Aihole, another temple town of the Chalukyas is located on the banks of Malaprabha River. It is around 35 km from Badami via Pattadakkal. If you wish to understand the development of temple architecture in their context and chronological sequence, it is to be visited before Pattadakkal. Aihole must be visited not only to see the famous temples but, also to understand ancient fortification, use of natural resources and also to see the settlements- old and the new. Your Aihole trail shall be of small through old villages and be climbing up hills. Before you begin, ensure you have proper gears to walk and stay hydrated throughout the day.

Most of the temples at Aihole are in complexes, your itinerary for the day will either depend on the mode of transport or chronological sequence. 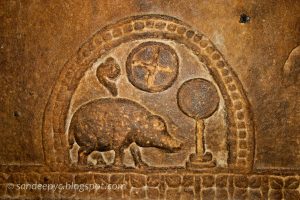 Royal Emblem of the Chalukya Dynasty.

Raval Phadi Cave – this cave is also known as Ravan Phadi cave, locals believe Ravan was killed here which gave the cave its name. This is one of the oldest structure at Aihole. The sculpture of Nataraja dancing along with the mother goddesses, depicted in the typical Pallava style of iconography here is something that you should not miss. 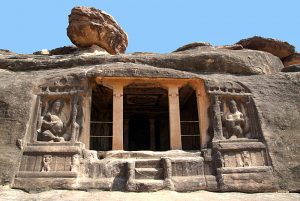 Durga Temple is the most prominent attraction at Aihole. A majority of the tourists visit this place only to see this one monument. The temple was dedicated to Lord Surya and not goddess Durga as the name suggests. The temple was abandoned only to be rediscovered recently. It was found connected to a small fortification, called as ‘durg’ in Sanskrit. Hence the temple got its name.

The temple is apsidal on the plan, which adds to its peculiarity. Locals believe this was the structure that inspired the architecture of the Indian Parliament. However, it is not the case. Apsidal or circular temples have been noted in other parts of the country as well. The temple has a symmetry and grace of its own. The outer walls are decorated with the sculptures. Each sculpture seems to be a masterpiece. The depiction of Mahishasurmardini holding various attributes while she kills the demon is a sculpture that you must not miss. Other sculptures are that of Shiva and Vishnu. 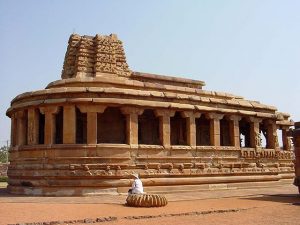 In the same complex, another temple is situated by the name Lad Khan temple. The name itself is what attracts many curious visitors. An old man by the name Lad Khan used to reside in the house when the British officers initiated a survey.  The temple’s architecture is also very interesting. The temple is based on a square plan and a sloping roof with a small square rooftop shrine placed on it. Scholars believe it was possibly a royal meeting place and not a temple. This argument is based on the architecture of this monument and also the royal symbol of the Chalukyas that is carved on one of the pillars.

The stone ladder as old as this temple can be seen in the mandapa (hall) is another fascinating thing of this temple.

Jaina Temple on the Meguti hill

We recommend an early morning climb to this hills for the perfect panoramic view of the Aihole Village. You may reach to the Jain Temple at the hilltop by climbing the steps. At the top a temple facing the north towards the town, this temple is of a great importance in the history of India. One of the side walls of the temple has preserved an inscription that speaks about the valour and generosity of the great king Pulakeshin II. This Sanskrit poem composed by his minister Ravikirti is also a great example of the developed language. This poem consists of various developed metres of Sanskrit language.

This inscription gives an account of the accession to the throne of Pulakeshin II, his victories over neighbouring kingdoms and also the most important victory over the King Harshavardhan of Thanesar. This was the victory of a king from South India over a North Indian king. Hence, this has been much revered in the poem! This poem also gives a hint about the date of the War of Mahabharata. I.e. Three thousand seven hundred thirty-five years before this inscription was written. 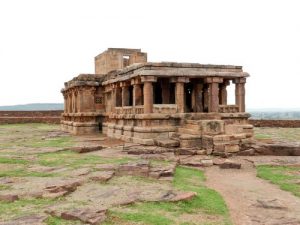 Just like Badami, Aihole too has a lot to offer for those who seek an adventurous and illuminating experience! The village is full of temples and small shrines. Each has an architectural beauty of their own. Some of the temples or broken structures have been also converted to residences or cow shed!

Some of the famous temples that one may add to their itinerary:

Wanderfirst travel tip:
If you wish to explore this village extensively, we recommend you to take a guide provided by Archaeological Survey of India.