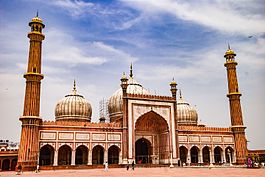 Shah Jahan was a great patron of Mughal architecture in the 17th century, of which, Taj Mahal, a mausoleum constructed in the memory of his 14th wife at Agra is famous worldwide. Many monuments constructed in red sandstone styled in Mughal Islamic Architecture stand strong in today’s Old Delhi giving the testimony of the grandeur of the bygone era.

Masjid-e- Jahan -Numa literally the mosque with a view of the world is the largest mosque in India. This mosque is

an important religious center of the Musli 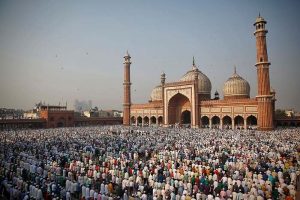 m’s and a great place to for the history lovers to learn about the Mughal art and architecture. It was constructed on the orders of Shah Jahan to be the central mosque of his new capital- Delhi!

The mosque took 6years to be completed under the supervision of Wazir Saadullah Khan and designed by Ustad Khalil and the craftsmanship of around 5000 artisans is a magnificent monument that showcases a beautiful poetry of red sandstone and white marble. Records say it did cost 1 million for the construction. The mosque has an open courtyard where around 25,ooo people can pray at the same time.

The mosque houses several relics of Islamic religious significance like an age old transcript of the Quran printed on deer skin, the footmarks, sandals, and a red beard-hair of the Holy Prophet Mohammad. Which increases the religious importance of this mosque.

The next time you are in old Delhi, exploring the Red Fort or Chandani Chowk do not forget to spend some time to appreciate the grandeur of Jama Masjid. Eid Mubarak!